U2: Intense, tight shows with dramatic sets and effects that amplify the sonic experience.  That’s what I’ve come to expect from the 2001 Elevation and 2005 Vertigo tours.  What I love most about U2 concerts is soaring through the arc of the songs while spinning around your own axis. 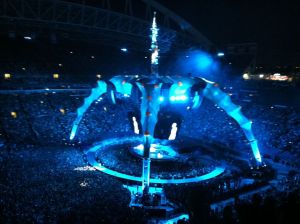 The Seattle stop on their 360 tour, however, wasn’t the same ride.  Admittedly, some of the distance I felt was situational.  The concert, which had to be rescheduled due to health issues, occurred 28 months after the release of No Line on the Horizon.  Peering down on the stage from the upper deck of a football stadium, I was literally far away from the band.

But the performance lacked the intensity of previous shows.  Rather than a carefully crafted set, the songs seemed like separate tracks with energy often dissipating between.  A few times, the Edge’s reverberating guitar unlocked from the drums and vocals.  Compound that issue with the challenges of engineering sound in an outdoor sports stadium, and the result was a fuzzy, loose mix unexpected from U2.

Some moments of intentional disintegration awed me.  Hanging a hundred feet above the band was a circular video screen.  Halfway through the show, the screen, comprised of small video monitors, began to separate, and sink into a checkerboard cone.  Just as the screen landed on the stage, surrounding the four musicians like the wall that they must, as mega-stars, have to erect around themselves psychologically, they started playing “Discotheque,” its Doppler effect swirling around the stage.  Images whirled in time with the beat.  Then “Discotheque” melted into another song, and the wall receded upward, revealing the band.

The 360 show did provide the most intimate moment of the three concerts.  Standing side by side without the usual rock star stances and choreographed moves, Bono and The Edge performed an acoustic version of “Far Away, So Close,” their voices locking into transcendent harmonies.  The performance offered a glimpse at U2’s origins, at the friendships and creative synchronicities that launched and have sustained the band for over thirty years.  While the song’s title conveys my mixed feelings about the most recent show, I take the long view when it comes to U2, recognizing the breadth and depth of their catalog and trusting that the sight and sound will align for the next show.

One thought on “Far Away, So Close”