Summer 1992.  I had just climbed into the back of my friend Marc’s car with my best friend April when our friend Johnny slid into the front seat with a cassette tape and said, “I’ve got something you’re going to like.”  An electric guitar rang out an anthemic melody, repeating as the drums and rhythm guitar joined to fill out the sound.  After a drum break, the song quieted briefly before a baritone as warm as the Texas summer night stretched out the word, “Son,” into two syllables, followed by the mysterious line, “Have I got a little a little story for you.”  As Marc pulled onto the road, the song crescendoed and crashed repeatedly in his tiny CRX, that ardent voice leading us deeper into the sound. 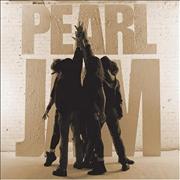 This year marks the twentieth anniversary of Pearl Jam’s iconic first release, Ten.  It’s been nineteen years since I first heard the songs that summer night when I was barely sixteen, barely aware of a world beyond the Dallas suburbs in which we lived.  During my first year of high school, I had joined a new group that included April, Marc, and Johnny, listening to alternative music by groups like Erasure and New Order.  I was just breaking my mainstream country habit, tiring of those syrupy voices singing only about love, songs that reinforced my narrow adolescent worldview.

But those Pearl Jam songs cracked open my shell.  I strained to hear the words and felt each distinct instrument stoke my interest.  My body hummed and roared with the music’s power, its sonic indignation.   I wanted the car and the cassette to keep rolling into the night.

Sure, the feeling was partially due to context.  Riding around town with friends, watching the sky darken above us, the soft night air drifting through the windows generated a magical feeling.  I was also tapping the energy of innocent flirtation with my new male friends.  But it was the unique sound and, to me, new subject matter that hooked me.

The schlocky pop lyrics of mainstream music had not prepared my mind for Eddie Vedder’s dense, cryptic lines and dark stories.  Violence, injustice, introspection.  While I missed a lot of meaning at the time, the absence of love impressed me.  But what compelled me most was the careening sound—the wailing voice and guitars that veered from fuzz to focus, from near silence into sonic ascent that led up and out and up until I experienced the sound both inside and swirling around me.  Without speaking to my friends, I drew closer to them as we rode the wave of the songs together.  And when we arrived at our destination, and the music stopped with the engine, I climbed out of the car buzzing with a new energy, feeling a few minutes older, a few inches taller and just a little closer to the inky night sky arching above me.

Missing the Old 97’s show in Seattle a few weeks just about broke my heart.  I usually count on the band to patch my heart together or at least shock it back to life with their rocking songs about lost loves and lost times.  Way back, almost to ‘97, in the fall of 1998, I lucked into seeing the Old 97’s when they opened for Chris Isaak at the Backyard in Austin.  At a melancholic phase of my life—post-college, post-boyfriend—I longed for the sonic retreat of Isaak’s blue tunes.

Waiting for him to take the stage, I found my toes tapping to the opening band, which I often ignored.  But this band—“the Old 97’s, y’all” as lead singer Rhett Miller announced—got my attention and much of the crowd’s, not a minor feat at an outdoor amphitheater with multiple bars.  The music, with its catchy hooks and sprawling sound, exerted its presence as did the members of the band.  Those four guys rocked hard, but singer Miller was the most fantastic, dancing and throwing around rock star moves from the seventies.  He swung his skinny hips to the beat and practically swallowed the microphone belting out his clever lyrics about love gone wrong.

The Old 97’s owned that stage in 1998, just like every venue at which I’ve seen them since.  Their music is accessible—when you hear a new song, you want to know the words so you can sing along, but it’s not simple.  It’s alt country at its best: rock swagger and instrumentation with country licks, punk attitude, and artful lyrics that invite both at-home listening and screaming sing-along.

Chris Isaak fell out of my rotation a decade ago, but the Old 97’s are still going strong.  Whenever I listen to one of their albums, particularly the live “Alive and Wired,” I shake and shimmy as at that first show thirteen years ago.  According to reviews of the show I just missed, the 97’s dished out the tunes with the same verve and conviction as always.  And like those reviewers, I’m already pining for another show.  Next time I’ll be there, with my heart on my sleeve.